The DNFI Natural Fibre Composite Price dropped 2 percent in July 2022 to US 219 cents/kg, compared with US 223 cents the previous month. The DNFI Composite is an average of prices in major markets for cotton, wool, jute, silk, coir fibre, and sisal, converted to US$ per kilogram and weighted by shares of world production. The DNFI Composite was pulled downward primarily by a 9 percent decline in the Eastern Market Indicator of wool prices in Australia, which fell from US$ 10.27 per kilogram in June to US$9.38 in July. October cotton ICE futures (the nearby contract) finished July marginally lower, closing at 228 US cents per kilogram, compared with 229 at the end of June. Prices of jute fibre in India quoted by the Jute Balers Association (JBA) at the end of July were unchanged from a month earlier, but with depreciation of the Rupee versus the dollar, calculated prices fell from 84 cents to 82 cents per kilogram. Prices of silk in China equaled US$29.5 per kilogram in July 2022, coconut coir fibre in India held at US cents 21 per kilogram, and sisal in Brazil finished July at US cents 41 per kilogram.

Cotton prices were the highest in a decade during 2021/22. Extreme drought in Texas, the largest producing state in the United States, is limiting the rise in world production that would otherwise be occurring. 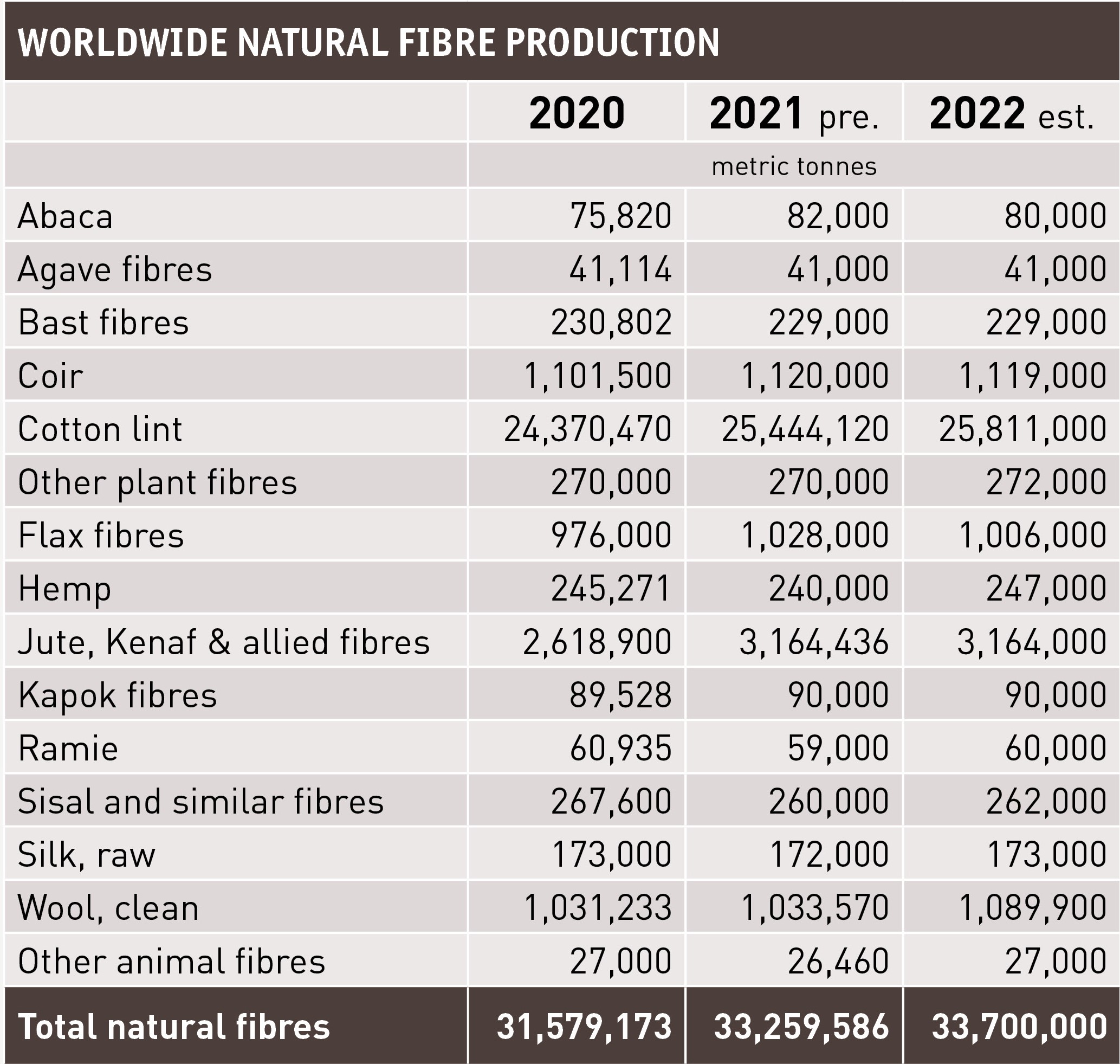 World production of jute and allied fibres is estimated unchanged at 3.2 million tonnes in 2022 compared with 2021. High market prices in 2021 motivated farmers to expand planted area in both Bangladesh and India, but dry weather in jute-growing areas during June and July has undermined earlier optimistic hopes for yields. Rainfall was approximately half of normal in the city of Kolkata from early June to mid-July.

Production of coir fibre rose by an average of 18,000 tonnes per year during the past decade, and production was record high at 1.12 million tonnes in 2021. Production is expected to remain high in 2022.

Flax has also been trending upward, rising by an average of 27,000 tonnes per year, and production in 2022 is estimated to remain above one million tonnes.

World wool production is forecast up by 5 percent in 2022 to 1.09 million tonnes (clean), the highest since 2018. Wetter weather in the Southern Hemisphere, following eight years of drought, is allowing farmers to rebuild herds.