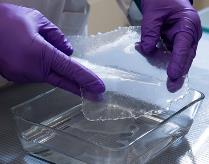 Dr. Abidi has developed a process to produce a plastic substitute from cotton by dissolving the fibres to form a gel which can be transformed into bioproducts, including plastic films. Cotton fibres are approximately 99 percent cellulose, and cellulose-derived bioplastics are inherently biodegradable in landfills and composting facilities. Testing shows that when for instance cotton cellulose bioplastic films are buried in soil decomposition begins in about three weeks. However, when these bioplastic films are kept in normal household conditions, they remain stable.

Several commercial applications are envisioned, including shopping bags, soil covering in agriculture, bioplastic packaging, and other single-use items. This technology can be developed as an inexpensive alternative to petroleum-based plastics providing a solution to plastic accumulation in the environment.

The Innovation in Natural Fibres Award has been granted by the DNFI since 2017 and honours outstanding scientific achievements in the field of natural fibres. The Bremen Cotton Exchange has committed itself to DNFI since its founding in 2010. At the beginning of this year, Elke Hortmeyer, Head of Communications and International Relations for the Bremen Cotton Exchange, has agreed to take the honorary chairmanship of DNFI for one year.