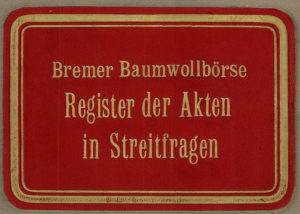 Arbitration has been one of the main statutory tasks of the Bremen Cotton Exchange for almost 150 years. It essentially concerns the settlement of disputes between contractual partners in the event of quality defects in the supplied cotton. Decisions made by the Cotton Exchange are internationally recognised and therefore quickly enforceable.

The archive of the Bremen Cotton Exchange holds many hidden treasures. The many documents stored there and other historical relics such as pictures, newspaper articles or awards are being systematised and recorded digitally. At the beginning of 2020, the Bremen Cotton Exchange received three months of support from prospective historian Joseph Kretzschmar. During this time, he dealt with the association’s early arbitration from 1873 to 1914 – from the first arbitration award made, to the beginning of the First World War. “The arbitration files in the archive of the Bremen Cotton Exchange provide deeper insights into the problems of the global cotton trade, the vulnerabilities of the goods at the time and the corresponding need for generally applicable provisions,” says the historian in his summary report. Overall, it became clear what significance arbitration had, especially for the increasing international cotton trade as well as for the administration of justice and legal history in Germany.

“Contract-related arbitration,” continues the article, “was and is, alongside quality arbitrage, the main task of the Bremen Cotton Exchange. It enabled faster, more cost-effective, more professional and more discreet decision-making than the courts of law, which meant that the Bremen regulations soon became decisive for the cotton trade running through Bremen.”

The author emphasises that it was essential that the rules proved to be practicable, secure and quickly enforceable, especially in daily trading. In doing so, they may occasionally have contradicted the intuitive understanding of law. As an example, the historian cites a verdict from 1889: A contractually promised cargo does not reach the buyer on time. The cause seems to have been a fire on board the ship. According to the rules of the Bremen Cotton Exchange, the seller must compensate the buyer, even if he is not to blame for the fire. The article points out that such a judgment in no way led to displeasure. “Quick and competent decisions make trading easier and enable neutral and face-saving agreement, which ultimately benefits everyone involved.”

Then as now, the following applies: “The arbitration awards are not guilty verdicts but ensure a fair balance of interests among equals in order to preserve fruitful business relationships.” The report also dealt in detail with the type of arbitration and the countries and parties involved in the supply chain. It was thus disclosed that in the Bremen Cotton Exchange judgements, neither trade nor spinning mills and neither domestic nor foreign parties were given preference. That speaks for the neutrality of the Bremen Cotton Exchange, which is to this day still anchored in its core.