In alignment with the UN Sustainable Development Goals, the U.S. Cotton Trust Protocol provides quantifiable and verifiable targets and measurements for a more sustainable cotton production. The Trust Protocol is overseen by a multi-stakeholder board composed of representatives from textile producers and trade, civil society, and independent sustainability experts, as well as the cotton industry.

In its first year of operation, the U.S. Cotton Trust Protocol has already welcomed 37 global brands and retailers, with a total of 100 expected by the end of 2022. The Protocol has incorporated 300 cotton producers who have collectively produced 207,000 tonnes of cotton, which represents six per cent of US production. In 2022, membership is expected to grow to 750 farmers with a production volume of 653,000 tonnes.

For decades, the 16,000 cotton farms in the United States have made great strides in more sustainable farming practices. According to the report, they now use about 80 percent less water and 50 percent less energy and have reduced greenhouse gas emissions by 40 percent. At the same time, land use efficiency has increased by 50 percent and soil erosion has been reduced by a third. But there is still further potential here.

The Trust Protocol evaluates sustainability using six metrics. Significant progress has already been made compared to the last surveys conducted by the US Department of Agriculture1 in 2015. 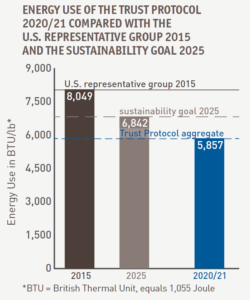 In 2015, about 10 square metres of land were needed to produce one kilogram of cotton. Trust Protocol members needed only 7.7 square metres for the same amount in 2020/21, states the annual report. As yields increase, the efficiency of land use increases. Trust Protocol members were also able to reduce the amount of irrigation water by 14 percent. Along its production process cotton requires energy in form of diesel fuel for agricultural equipment, electricity for pumping irrigation water, and electricity and natural gas for ginning. The production and transport of fertilisers also consume energy, as does the transport and production of crop protection products. This energy consumption was reduced by 27 percent compared to 2015 thanks to more efficient energy use. Closely related to the energy consumption is the reduction of greenhouse gases (GHG); Trust Protocol members have been able to reduce their GHG emissions by 25 percent compared to 2015.

Trust Protocol members have reduced soil erosion by almost 80 percent compared to 2015, thanks to the latest techniques.

Another important element of soil health is soil carbon sequestration, which is important for water and nutrient storage among other things. It has been substantially increased and 66 percent of members had positive carbon sequestration in their soils in 2021, according to the Soil Conditioning Index (SCI), thus actively contributing to climate protection.

By 2025, the U.S. Cotton Trust Protocol has set itself further ambitious goals, both in terms of growth of the initiative and sustainability metrics:

We aim to convince more and more growers to join our initiative and to cover 50 per cent of the cotton grown in the US by 2025. 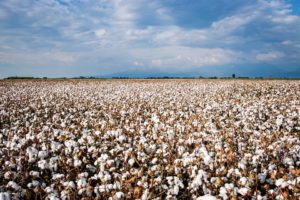