14. September 2017 / Impurities in organic cotton – how reliable are test methods?

The share of organic products sold in Europe is still 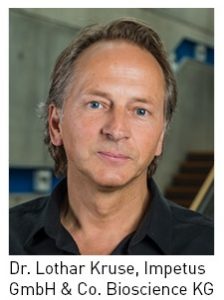 very low. The use of genetic engineering is not allowed in the production of organic cotton. However, if consumers are specifically looking to buy organic textiles, seals of approval should help identify products made according to organic guidelines. But can we trust products with organic seals in the long term? With reference to the reporting in the previous edition, the editorial team of the Bremen Cotton Report spoke about this with Dr Lothar Kruse, Managing Director of the Impetus GmbH & Co. Bioscience KG test institute in Bremerhaven.

Cotton Report: Dr Kruse, what is the focus of your institute?

Lothar Kruse: For more than 20 years, we have specialised in the study of genetically modified organisms. Since 1993, we have been instrumental in the development of detection methods. In doing so, we have developed our own innovative testing methods and are continuously expanding our range. We are a flexible, accredited test laboratory for food, animal feed, seed, plant active ingredients and natural fibres. A major part of our work includes authenticity tests based on the genetic testing of food and animal feed products, as well as testing allergens in food. In addition, we carry out authenticity tests on Pima cotton. Since 1998, we have been working intensively on DNA analysis methods that enable us to identify genetically modified cotton material. The interest in tests is increasing, as the use of GMO cotton is excluded according to the production guidelines for eco-textile labels and there is a need to comply with advertising promises.

How do DNA tests work for cotton?

Clearly expedient in testing cotton for GMOs is so-called “event evidence”. This not only provides initial indications for genetic modification, but also an opportunity to precisely identify a specific foreign DNA in cotton plants. In addition, the share of GMOs can be quantified. We have information about the DNA of many non-genetically modified cotton varieties, as well as genetically modified cotton lines, which we compare with the material to be tested. So, for example, specific DNA sections of genetically modified insect-resistant cotton can be identified and quantified, e.g. with the event name MON 531 or MON 15985.

After your experience, where do the organic cotton samples with most impurities come from?

It is noticeable that organic cotton samples originating from India particularly frequently contain genetically modified organisms. This was not the case with cotton from other countries, such as Turkey. This could be due to the fact that in India it is difficult to avoid the possibility of unintentional mixing within the flow of goods, given the over 90% share of genetically modified cotton in cultivation. Of course, as we are told, deliberate mixing also occurs. This makes controls necessary.

What are the limits of DNA testing methods?

We recommend testing untreated cotton fibres. Purely mechanical consumption processes such as combing and spinning are no problem. Chemical processes are problematic, such as when bleaching with hydrogen peroxide or during dyeing with certain aggressive dyestuffs, which render the genetic material unrecognisable and destroy it. In the finished textile and clothing product, the use of genetically modified organisms cannot be verified at all, or only in the rarest cases, using current testing methods. In the future, however, this could become possible on the basis of mass spectrometer technology.

What is your opinion of the criticism, for example from the issuers of seals, that a lack of standardised test procedures leads to diverging test results?

It is known that deviations currently occur when comparing the test results of different laboratories on the same samples. This could be due to a lack of experience, or the test method used. Ultimately, however, it is due to the absence of internationally standardised test procedures and the lack of continuous testing in round tests. For a long time, we have recommended the introduction of standardisation and the organisation of round tests. If this is being tackled now, as we have heard, this is welcome from our point of view because it contributes to building confidence in test results.

Thank you for the interview!

The interviews reflect the opinion of the respective interview partner and do not represent the position of the Bremen Cotton Exchange as neutral, independent institution.