The Bremen Cotton Exchange was founded 150 years ago in 1872. 2022 is an anniversary year with many events, the publication of a book and a conference. Reason enough for a long interview with the Executive Committee to talk about the current situation and to take a look into the future. 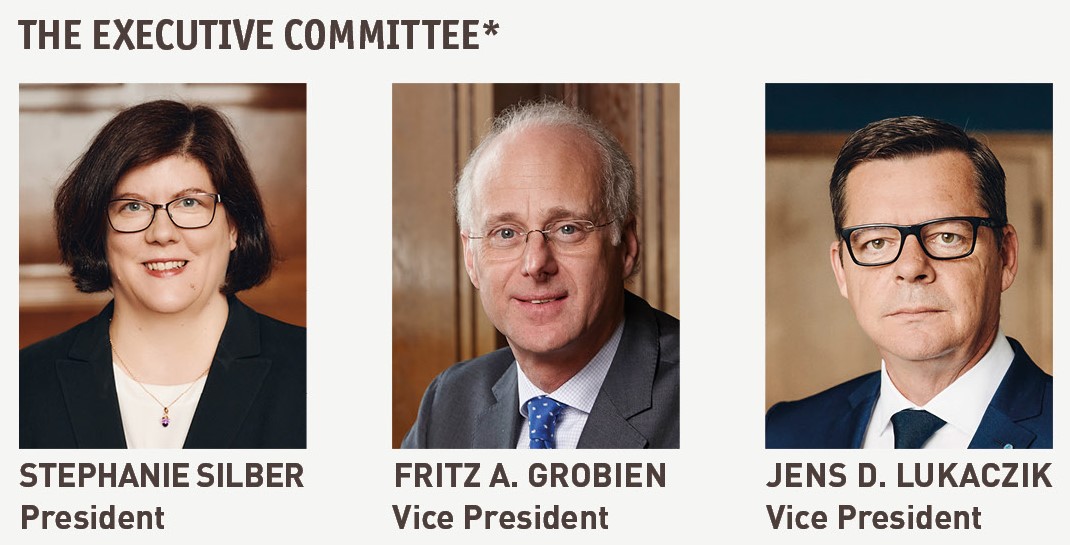 * Unfortunately, Ernst Grimmelt was unable to attend the interview.

COTTON REPORT: It’s 2022. This year the Cotton Exchange will be 150 years old. In the editorial office, we think that’s a very impressive number. Ms Silber, how does it feel to be at the helm of a very traditional association just at this very moment? 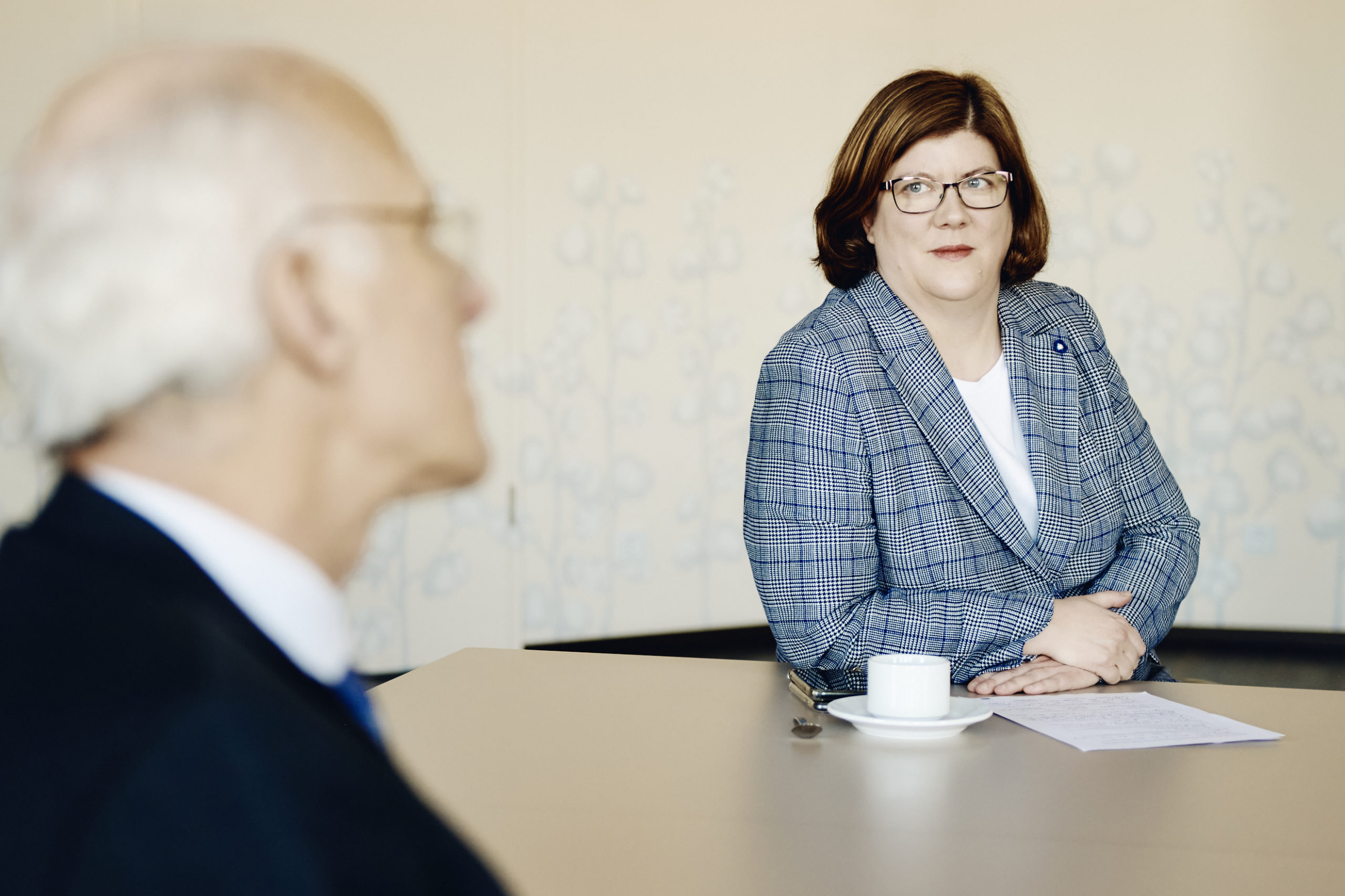 STEPHANIE SILBER: It is a great honour to lead the association in its 150th year. But of course I’m not alone, I have a team with three vice presidents* and a business office, who also accompany everything.

CR: In this anniversary year there will be a big celebration. Do you have any special activities planned? Are you really celebrating a birthday?

JENS D. LUKACZIK: First of all, I hope that we can actually celebrate. Big celebrations have never been our aim, but rather traditionally, appropriate to the occasion. And it looks like we will also be lucky enough to be able to hold our long-planned event. We would like to celebrate our anniversary here in Bremen together with our friends from the global cotton community. That’s why we decided to hold the event in the autumn, in order to be able to hold a major event at all.

SILBER: On the other hand, there is of course the special exhibition in the Bremen Überseemuseum (Overseas Museum), a local event to show us again to the region as well as pull in the people of Bremen. But perhaps we will also succeed gaining attention beyond this region with the exhibition.

CR: Mr Grobien, why does the Bremen Cotton Exchange even exist? 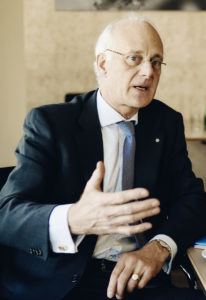 FRITZ A. GROBIEN: Why does the Cotton Exchange exist? Quite simply: An independent arbitration board was needed to settle disputes quickly and effectively, to decide against the background of the complexity of commodity trading. The alternative would be a civil court. Firstly, that would take too long, even back then. But what is much more important is that the civil court does not understand anything about the goods. This means that product-related questions could only be solved by a specialist or assessor, and that all takes time. So trade and industry got round the table to agree on a common set of rules and an institution emerged that is impartial and independent. That is what is special about the Cotton Exchange, because when it was founded, it also paid attention to a 50/50 balance in the committees and within the institution itself. Impartiality was the original idea.

CR: Has the Cotton Exchange changed in the last 150 years? Has anything remained of the old tasks?

SILBER: Both, of course, and change is always something positive. The independence has definitely survived, while the arbitration court is evolving. Whereas our focus used to be on German imports, it is now global, and the volumes have simply changed. We have used our strengths, expanded the field and we now work worldwide.

GROBIEN: The first thing was the arbitration function, that was the original idea, so to speak. Then came this actual stock exchange concept, where buyers and sellers meet. This was then lived out in the futures market. But a lot of tasks have been added. Because the cotton trade has changed significantly over the past 150 years, the Exchange has also had to adapt. The core task has remained: The most important thing right from the start has been this impartiality and independence and of course the respect, authority and credibility that go with it.

LUKACZIK: The court of arbitration is still the common thread that we cover worldwide with ICA Bremen, especially via the qualitative route. And arbitration is all about credibility. Credibility only works with experience and respect.

CR: Keyword ICA Bremen. In 2006, ICA Bremen was created through an important joint venture with the ICA. It is still relatively young today, compared to the old lady of the Cotton Exchange, but is already relatively successful. Or how do you see it? 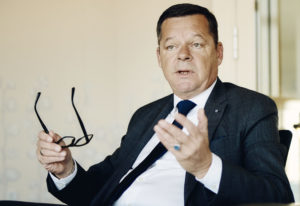 LUKACZIK: ICA Bremen is of course already very mature and now has this unique selling point: if we class a certain quality, it is accepted everywhere, even in markets such as China and the USA. Everyone knows that we are the reference laboratory in terms of cotton qualities. We owe this relatively quick acceptance to our credibility over more than 150 years. The Bremen Cotton Exchange provided the template here, also in connection with our cooperation with the Fibre Institute. This is where we can reap the benefits of the scientific ambition on which this quality of testing and the outstanding know-how is based.

GROBIEN: But that didn’t just happen overnight. No, it was a long way and a lot of work for both the ICA and us. The competence and the physical quality assessment of the cotton, research and development were in Bremen. Of course we had to overcome some historical resistance and perhaps also resentment and prejudices. I think what’s really special about this operation is that the younger generation, who were given more responsibility, wanted it. They have seen how the world is changing.

LUKACZIK: The ICA has a very big, old tradition, so at the time it wasn’t easy to let go there. But the development towards further internationalisation of the ICA naturally also helped to see the bigger picture. They valued excellence just as much as we did here.

SILBER: Both associations had to give something up, but each brought in their strengths. Ultimately, we wanted to create something that is strong in global trade. Because that’s the only way to gain the authority you need to assert yourself in the complicated global environment.

GROBIEN: We gave up our rules. That was something that was also very much part of our identity. And the Liverpool team had to give up its name.

LUKACZIK: And so the name itself reflects the common idea: ICA Bremen.

CR: Do you have any ideas for the future of ICA Bremen? 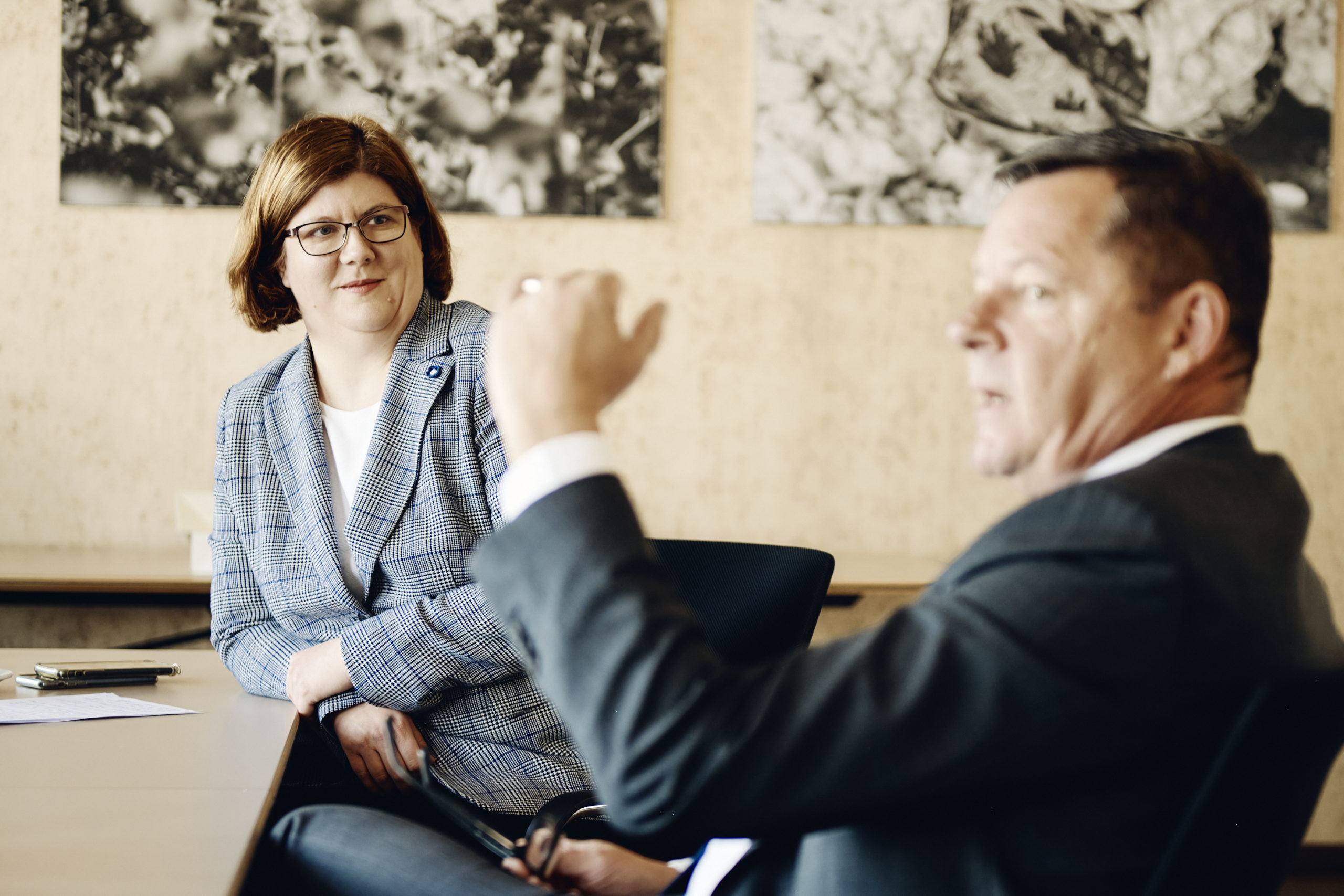 LUKACZIK: Growth is not our primary goal. It is important that we maintain our excellent level and at the same time continue to develop. We want to transfer our quality demands to other market participants because in the end, with a high standard and improved quality, disputes can be reduced or avoided entirely.

SILBER: The certificate saying that it was checked here in Bremen is often enough to achieve a fair solution. In that case, the arbitrator doesn’t even have to look at it.

CR: What challenges has the Bremen Cotton Exchange overcome in the last 25 years? What is particularly important to you?

LUKACZIK: We have changed from an administrative system to an association that thinks constructively and progressively. Our basic concept now is: What can we do for cotton? We do not see ourselves as representatives of individual interests, but simply as representatives of the natural product raw cotton.

SILBER: The neutrality, the independence, the credibility. Thanks to our predecessors, who built this building, we can think freely and then make decisions that may not be mainstream but are sustainable and meaningful in the best sense of the word.

GROBIEN: To be honest, there has been a bit of luck involved. In 1902 this house was built as a luxury office building, by the standards of the time. But the fact that the association got it practically for free is thanks to the hyperinflation of the 1920s, because up to then the association had massive debts.

CR: How could they even afford a house like that?

GROBIEN: When cotton came from the USA at the end of the 19th century, practically every bale was classed here. The American shippers had branches everywhere and then sold to the spinning mills and textile companies, either through agents or even subsidiaries. At that time, cotton was packed onto ships in the USA and then classed here in Bremen at the Cotton Exchange. This again shows our credibility and the trust that goes with it. At the time, the association earned a lot of money with this service.

The first foreign representation of the United States of America was nowhere else than in Bremen. Cotton from the southern states was one of the most important sources of foreign currency. If you look at the history, many companies were founded either by Americans or with American partners. This interconnection is also a source of our current status. It is the origin of acceptance, credibility and recognised authority even beyond our national borders. It’s easy to demonstrate that nationally, but internationally it was more difficult.

CR: Where do you see the Bremen Cotton Exchange in five years?

LUKACZIK: I see us as a neutral advisor and source of knowledge for relevant questions about the cotton supply chain. And that all the relevant participants actually consider our information to be important, true and relevant.

SILBER: I also see a development in terms of establishing ourselves as a fixed institution, both nationally as well as in European politics. Politics is a good keyword. We have managed to establish ourselves here, and in the future the subject of supply chains will also be on the agenda in Brussels. There is still a lot of commitment ahead of us.

Ultimately, the whole chain has to know where we have come from and where we are going. And in a transparent and comprehensible form. How can we help? Can we also get involved to prevent any nonsense from happening? We are very active in politics, worldwide and in the immediate political environment. We get involved because we contribute our knowledge and our authority for the good of our industry.

These issues – due diligence, supply chains – will continue to be the focus for the next five years, at least. Here it is important to use our credibility to avoid working with untruths and fake news. 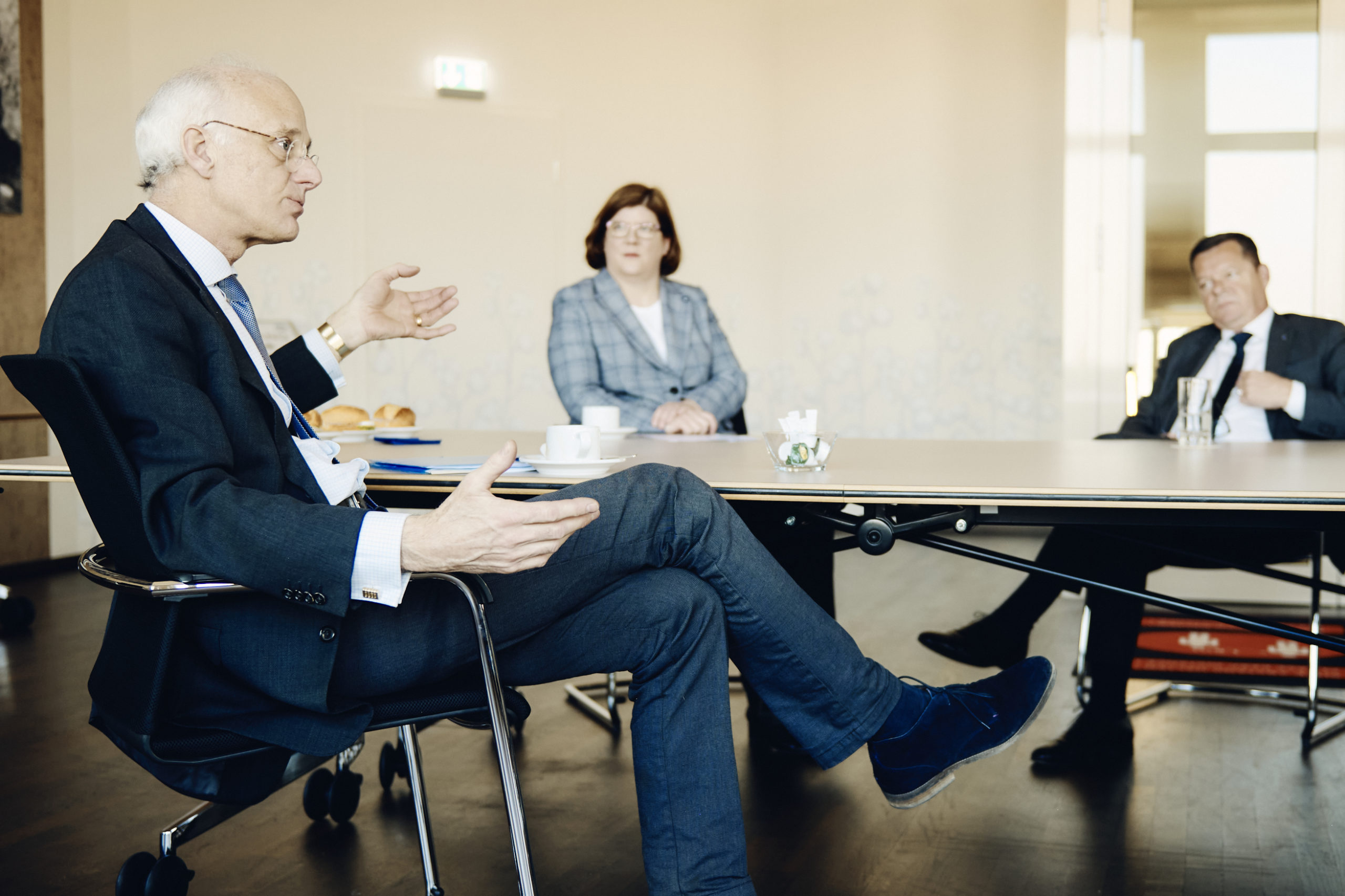 CR: Let’s stay with the future. What will it look like worldwide in five years?

GROBIEN: I firmly believe that our issues will be strengthened by the discussions around climate change. We need all fibres, but the competition must also remain fair. I’m convinced it’s very important that we play a role.

SILBER: I would agree with that. With a growing world population there will be problems. People not only have to be fed, but also clothed. Microplastics and the upcoming challenges of agriculture are further keywords for tasks that are coming our way. We need all fibres in the market, no raw material should be treated unfairly. As the Cotton Exchange, we want fair competition. But what is happening in Brussels at the moment is really critical. This is a challenge for us, and we will face it. 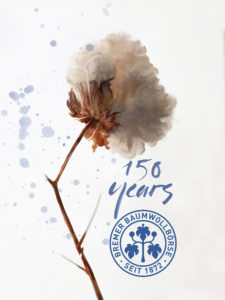 CR: Is that the final word?

SILBER: Not quite, I’d like to end on a positive note and re-focus on this very special year for the Cotton Exchange. We have many exciting events planned around our anniversary. Of course, the focus is on the Cotton Conference in September. But we also want to present ourselves to the people of Bremen with an open house in spring. The focus here is on the anniversary book, which gives a really nice impression of our history. The exhibition on cotton in the Überseemuseum also provides a new way into the subject of cotton, both current and retrospective. We will be happy if many people around the world celebrate with us.

Thank you for this interview!