In trade dispute between the United States and China the expectations regarding the trade dispute have moved away from escalation and towards reconciliation. Nevertheless, the consequences of this already year-long exchange of blows are clearly noticeable in the market. The USA and China are among the big players in the international cotton industry. The USA is the largest cotton exporter and the fourth largest cotton producer, with currently growing stocks. Alongside India, China is the world’s largest producer, the largest consumer and at the same time, the largest importer of cotton.

This is also the reason for the widespread insecurity in completing contracts in the international cotton trade. As a result, the volatility of cotton prices has continued to increase. For a year, falling prices have been reflected in the declining values of all the major price ind 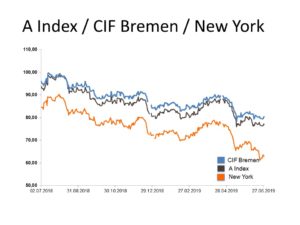 At the beginning of June 2018, the time of the first increase in import duties by the USA and the increase in tariffs on agricultural products in China, cotton was trading at 100 cents/lb, based on the A Index. The price fell to 94 cents/lb in August/September, as trading tensions increased due to higher import duties and counter duties. A further decline followed in the period between October 2018 and April 2019, with fluctuation ranging from 80 cents/lb in February to 88 cents/lb in April. As negotiations to settle the dispute suffered a setback at the beginning of May, prices reached only 76 cents/lb. On July 15, quotations reached 73.65 cents/lb.

Despite the trade dispute, which appears to be the ‘new normal’, global cotton consumption in the 2019/20 season is expected to increase by 1% to 26.9 million tonnes, according to calculations by the International Cotton Advisory Committee (ICAC). China is expected to fall by 200,000 tonnes to 8.25 million tonnes. However, with this result, the country remains by far the largest consumer of cotton, with cotton imports likely to increase to 2.1 million tonnes due to the normalisation of cotton reserves in the country.

This alone should keep pressure on cotton prices in the medium term. Added to this are the uncertainties caused by trade disputes, as well as a slowdown in economic growth in Europe and possibly also in the USA, where there is big for cotton textiles and clothing.

*** The CIF Bremen represents the daily value of cotton traded on the European northern continent. It is determined by the Price Committee of the Bremen Cotton Exchange.