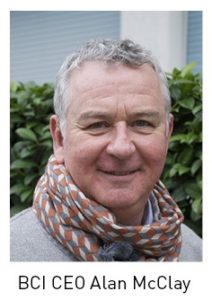 he Better Cotton Initiative BCI supports improvements within cotton production all over the globe. Its purpose is the further development of plantings with regard to economic, environmental and social issues, always keeping in mind the benefit of the farmer. BCI was officially established in 2009 by various protagonists. BCI collaborates with different organizations from the whole cotton supply chain and other interest groups. The Initiative invites the global cotton community to Berlin to its very first BCI Global Cotton Conference on May 17 and 18. The editorial team of the Bremen Cotton Report spoke with BCI CEO Alan McClay in the run-up to the event.
Cotton Report: What has been achieved in terms of membership, cotton production and farmers within the programme by BCI? What are the global goals for the coming years?

Alan McClay: There are currently 1.5 million licensed BCI Farmers and over 1000 BCI Members from across the cotton sector working together to promote measurable and continuing improvements for the environment, farming communities and the economies of cotton-producing areas.

In the 2015 – 16 harvest, we reached nearly 1.6 million farmers in 22 countries, including China, India, and Pakistan, some of the world’s biggest cotton producing nations. A sizeable 12% of global cotton production is already licensed as Better Cotton, and we are targeting 30% by 2020. That’s 8.2 million metric tonnes of Better Cotton.

What are current challenges of cotton production in developed and developing countries and what are BCI’s ideas to solve them?

There are many challenges in cotton production — including child labour, the use of pesticides, soil depletion, smallholder poverty, habitat loss, and water management. Different challenges are faced in varying degrees by cotton producers around the world, in both developing and developed countries, and BCI’s intent is to try and address many of these challenges via our Better Cotton Production Principles and Criteria

The current Production Principles and Criteria have been designed so that Better Cotton is produced by farmers who:

minimise the harmful impact of crop protection practices;
use water efficiently and care for the availability of water;
care for the health of the soil;
conserve natural habitats;
care for and preserve the quality of the fibre; and
promote decent work.

The prominence of a particular challenge may vary considerably, depending on the circumstances which persist within a specific national, regional or, indeed, local scenario.

The Better Cotton Standard System has been designed in such a way that once the issues have been identified they can then be addressed as part of a continuous improvement plan which is relevant and appropriate for the farmer or farmers in question.

What are the overall benefits of BCI Membership within the cotton supply chain?

BCI Members are supporting better environmental practises, supporting better livelihoods and working conditions for farmers and farm workers, and becoming part of a global initiative to secure a more sustainable future for the cotton sector.

Through access to the Better Cotton Tracer, BCI Members are able to make credible claims to communicate their sourcing of Better Cotton and make verifiable commitment-based claims on and off product.

What are current projects which can explain your work best?

This year, approximately 200,000 Pakistani cotton farmers will benefit from a global cotton industry partnership between BCI, Cotton Australia, and the Australian Government. The training will address the most pressing sustainability issues in cotton farming such as pesticide and water use, and social challenges like child labour, forced labour, gender issues and fair-pay.

The Cotton Australia team will support BCI’s Implementing Partners in Pakistan in delivering training on progressive environmental practices to the country’s farmers. The move has been made possible through a $500,000 grant from the Australian Government’s Department of Foreign Affairs and Trade (DFAT), which will be matched by the BCI Growth and Innovation Fund. Together, Cotton Australia, DFAT and BCI aim to reach 50,000 new farmers in 2017, enabling a total of 200,000 farmers in Pakistan to grow and sell Better Cotton.

This project is an unprecedented example of sharing progressive environmental practices globally, and of people coming together to form a global partnership; sharing knowledge and skills, and working in synergy towards a common goal to achieve measurable reductions in key environmental impacts, while improving the social and economic benefits for cotton farmers.

What about plans to create awareness about BCI towards the end consumers?

BCI On-Product Marks are starting to make their way to end-product swing tags on the high street.

Thank you very much for the interview!

Interviews embody the opinion of the respective interview partner and do not represent the position of the Bremen Cotton Exchange as neutral, independent institution.